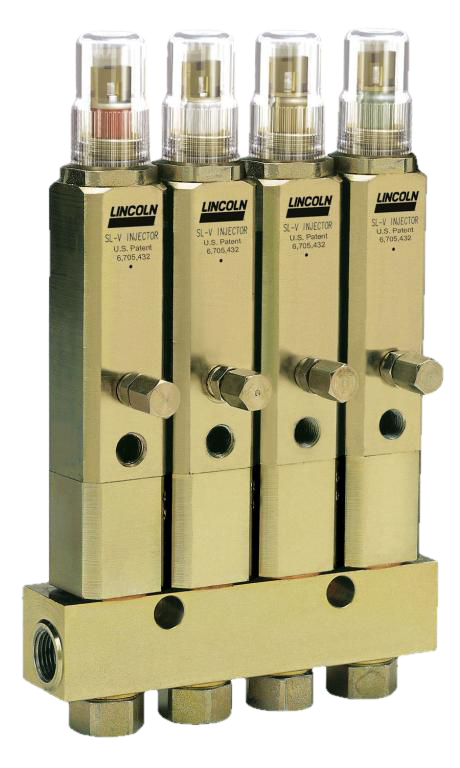 The changes are built around the new Lincoln SL-V Injectors. Since the system was first introduced in 1937, there have been many improvements to the injectors and other elements of the system, but the SL-V represents the most significant advance in the history of the line.

The Lincoln SL-V Injectors allow Centro-Matic systems to vent quickly which means the injectors reset many times faster. This has several implications when designing a system:

These patented injectors (Patent No. 6,705,432) feature a visual bypass indicator that warns of an internal bypass eliminating the need to remove feed-lines for bypass inspection. In addition, an available Spectrum Adjustment System that allows quick setting of injector output. This feature is not only ensures accurate and repeatable output settings, it gives a visual indication of output setting using color-coding. Every injector comes with a bulletproof protective cap for no additional cost.

The SL-V XL vents as much as 80 times faster than other standard high-output injectors. It has a maximum operating pressure of 6,000 psi and vents at 1,000 psi allowing for less time between lube events. Standard injectors have a maximum pressure of 3,500 psi and vent at 600 psi. With the new, patented SL-V XL injector, using thicker grease, running longer or smaller supply lines, and eliminating grease change-outs in cold weather means increased performance with less cost.

A Centro-Matic lubrication system typically is called a single-line parallel system because it has a single supply line and each injector acts independently of each other. Here are its key features: Cutaway Animation
View the internal features of the SL-V injector with this video file we’ve converted to Flash to enable you to view the complete file with audio. Choose the correct file based on your connection speed. Allow enough time for the file to load before it begins to play.

Vent Speed Demonstration
View a demonstration of the superior venting capability of the SL-V with video file we’ve converted to Flash to enable you to view the complete file with audio. Choose the correct file based on your connection speed. Allow enough time for the file to load before it begins to play.

Contact Us for more information about Lincoln’s Lubrication Products.

We use cookies to ensure that we give you the best experience on our website. If you continue to use this site we will assume that you are happy with it.Ok